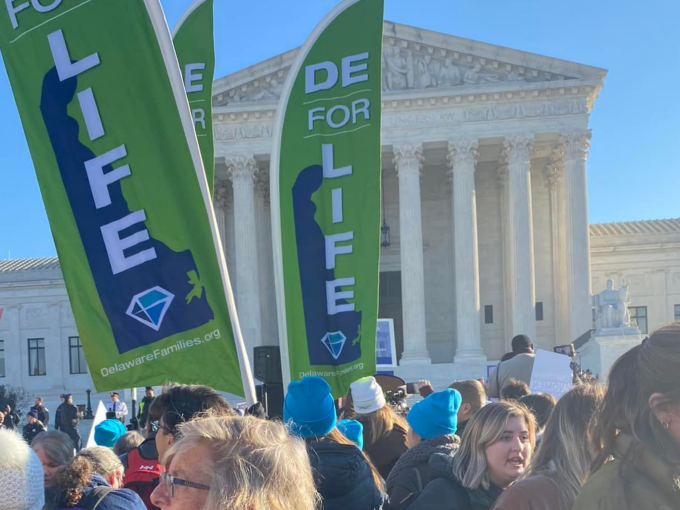 Kathy had the unique privilege of joining ADF to intercede not only for their attorneys but for those directly involved in the case itself. As she listened to the oral arguments surrounded by prominent pro-life attorneys, she felt the weight of just how critical this case is for the future of the unborn... and how many millions of lives have been lost in the past 49 years.

So, we must pray for an end. As Kathy interceded for the attorneys, the case, and the future, we must "pray without ceasing" for God to be merciful to our country and that He will continue to provide strength to those willing to be on the front lines to protect the most vulnerable among us.

As we wait and pray, here are five things we should know about the case and how it might impact Mosaic PHC:

The nine justices of the United States Supreme Court have voted in the "Dobbs" case. We may not know the outcome for months as their opinions are prepared. However, it is possible that a justice can change their mind during that time. We must pray that any justices voting against "Dobbs" will change their minds.

Even if the majority of the SCOTUS justices vote in favor of the Mississippi law, it will not "ban" abortion nationally. It will simply turn the decision back to the states. Thankfully, as many as 26 states could restrict access to abortion following a favorable verdict.

3. This case will affect Illinois (not how you might think!).

While Illinois will not enact pro-life laws (as of June 1st, NO abortion laws will be on the books), IL will very likely see an increase of out-of-state women seeking abortions. Of the 26 states that could restrict access to abortion, four of them, Iowa, Missouri, Indiana and Kentucky, directly surround Illinois. (Wisconsin was not included in this list as their Governor recently vetoed five pro-life bills.)

4. Mosaic will likely see an increase in clients considering abortion.

With more women seeking Illinois abortion information online, we will likely see an increase in clients due to our marketing strategy to intercept them before they reach the abortion facility.

5. "Dobbs" will not affect Mosaic's lawsuit.

Despite both cases involving State laws regarding abortion, our case involves First Amendment rights, including freedom of speech. Since Illinois is a very "abortion-friendly" state, it will not enact pro-life laws (as mentioned above). We will continue to battle for the hearts and minds of those considering abortion if the injunction that allows us to operate as usual is not dissolved.