IL Bill 1564 Has Been Signed Into Law 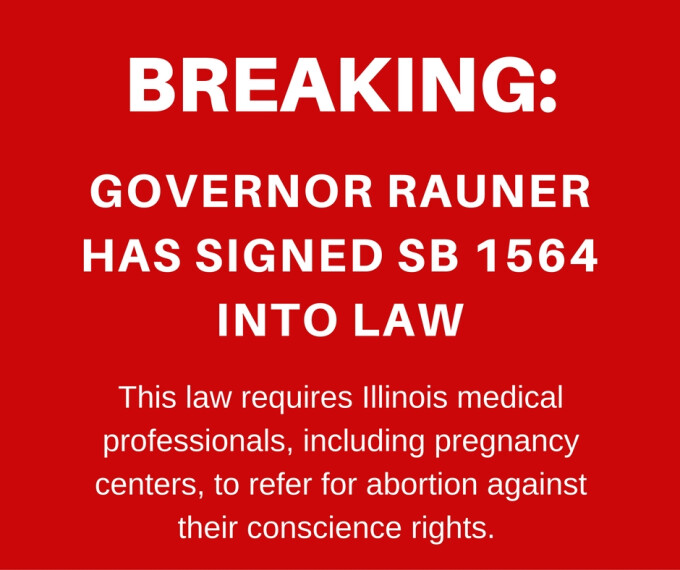 Recently, we informed you of SB 1564, the bill that would require Illinois medical professionals, including pregnancy centers, to refer for abortion. Unfortunately, Governor Rauner has signed the bill into law.

A few words from Illinois Right to Life:

This bill forces medical personnel and pregnancy resource centers to refer for abortions and discuss the "benefits" of abortion.

On the final vote in the General Assembly, every single Republican member voted against the bill. They deserve our gratitude.

I want to make one thing clear:

The Illinois pro-life movement did all that we could to try and stop this bill.

We hosted press conferences, wrote op-eds in the most prominent newspapers, educated state and federal legislators, and delivered nearly 6,000 petition signatures to the governor asking him to veto this bill.

Let me repeat: I have never seen the pro-life movement in Illinois stand so passionately and work so hard together to defeat a bill.

In fact, your hard work did what many thought was initially impossible: delay, stall, and kill the bill for over a year.

Thank you to every one of you who faithfully and repeatedly called and emailed our governor and legislators to voice your opposition to this bill.

This new law does not go into effect until January 1, 2017. We're working with medical professionals and pregnancy resource centers to examine all the options.

Law firms like ADF and the Thomas More Society are promising lawsuits.

As Illinoisans, we signed up for the tough fight. Our neighbors in Indiana, Missouri, and Wisconsin may have a more pro-life friendly state. But Illinois is the last remaining crown-jewel for the abortion industry in the Midwest.

Strong pro-life people like us are needed now more than ever in Illinois."

Thank you to every one of our Mosaic PHC supporters for making your voice heard by calling, emailing and signing petitions. We appreciate your efforts!

While we may not know yet what this means for Mosaic PHC, we ask you to remain in prayer for us while we navigate the possibilities. Thank you!